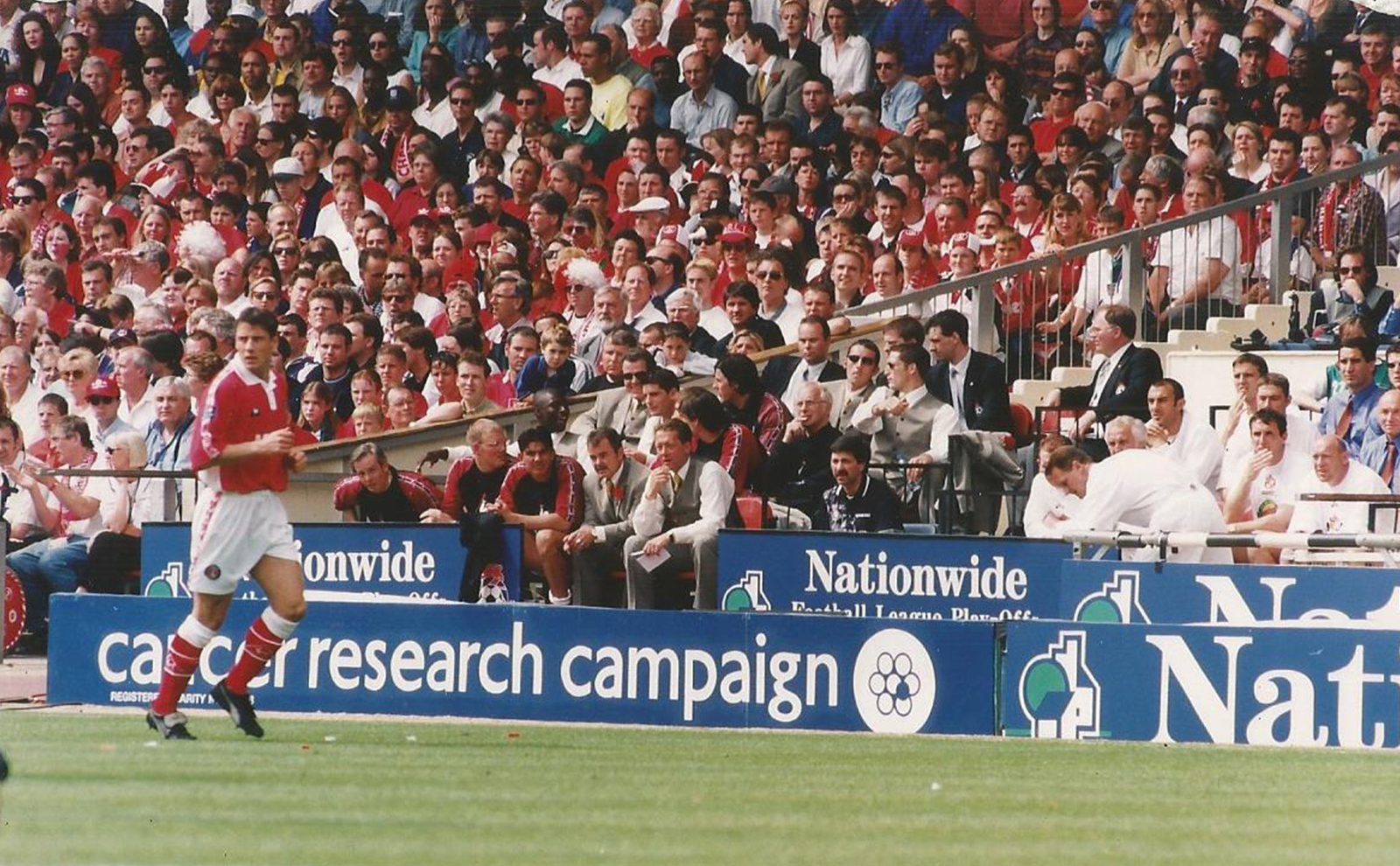 By suthersuk25th May 2018 No Comments

Today marks the 20th Anniversary of my last ever Wembley match as Marketing Executive of The Football League. I left The League to join Swindon Town FC as Commercial Director shortly afterwards. However, the game is probably better known for being the iconic Play-Off Final between Charlton Athletic and Sunderland!

I’m currently collating material for a book on my experiences in my long career in football, which will include extracts from my diary that I kept throughout my 8 years at The Football League. This is my diary entry for that incredible day in May 1998:

The day that I had been longing for ever since I joined The Football League in January 1991, the day that my club, Charlton Athletic FC were to appear in the First Division Play-Off Final.

I met Jack Taylor for breakfast and it was good to have a chat with him – it’s always good to chat to Jack, he’s such an icon in the game and I’m privileged to call him a friend and a colleague.

After breakfast with Jack I went back to my room at the Wembley Hilton, changed into my Football League blazer and tie and then made the short walk across to the Stadium. Even at this early hour there were Sunderland fans everywhere.

I think I experienced the whole gambit of emotions today. I was excited that my team were here, I was proud of them and I was also proud of myself that this former Bank Clerk from Plumstead was now in such a privileged position. Above all though I was sad, as I kept thinking about my Dad and how much he would have enjoyed the occasion and how proud he would have been of me.

As the famous old stadium started to fill up I went on a walk around the pitch. Looking up at the smiling faces of the Charlton fans was such a brilliant experience and when many of them started to shout my name – some even asked for my autograph – I just can’t describe how I felt. I also made sure that I was in the Players’ Tunnel when the Charlton team coach arrived and the players all seemed genuinely pleased to see me there waiting to welcome them off the coach. What made the players smile was the fact that I had positioned a Charlton rosette inside my Football League blazer and I kept ‘flashing it’! In fact legendary Charlton photographer Tom Morris photographed me doing it!

All my colleagues knew that I would not watch the match from anywhere other than the back of Charlton’s bench and although I was used to being that close to the action at Wembley, the fact that it was Charlton just made it so special.

As for the game, well it turned out to be one of, some say the best, matches ever played at Wembley. It was 1-0 to Charlton at half-time thanks to a brilliant Clive Mendonca goal but nothing would prepare us for the second half. Clearly Peter Reid gave the half-time team talk of his life as before too long Charlton found themselves 2-1 down thanks to goals by Niall Quinn and Kevin Phillips. Incredibly Charlton equalised through that man Clive Mendonca again but there was more drama to come. Niall Quinn scored again and the clock was against Charlton. Charlton had brought on John Robinson and his corner kick was brilliantly headed home by Richard Rufus for his first ever goal. What a time to score your first ever goal as just minutes later the whistle went to end the game and to send the match into extra time!

The atmosphere in the stadium was electric and my Football League colleagues and I agreed that whoever scored first in extra-time must surely win. How wrong we were!

After a few moments Alan Curbishley sent on striker Steve Jones for Mark Bright and immediately Steve caused problems for the Mackems but it was to be Sunderland’s Nicky Summerbee who scored next. The Sunderland fans, understandably went mad and it was hard to stop myself from thinking that this had to be it now for Charlton but this team just never know when they are beaten. Steve Brown who had come on for Neil Heaney won an absolutely bone-crunching tackle, Steve Jones got a cross in and Clive Mendonca scored a simply stunning goal for the equaliser and his hat-trick. What a game! Minutes later we were in to penalties. The atmosphere on the team benches was absolutely electric but you could almost touch and feel the nervousness.

The commitment and togetherness of this Charlton team was amazing and it was incredible for me to be seated just behind the Charlton squad members Stuart Balmer and Phil Chapple.  The quality of penalties from both teams were simply awesome. We were now in sudden death. Mark Bright couldn’t look so he stared at me for my reaction! Alan Curbishley had his head in his hands and Keith Peacock had to keep him informed. John Robinson put his penalty away so now Sunderland’s Michael Gray had to score. He didn’t! Sasha Ilic easily saved it to instantly become a Charlton hero. The fairy tale came true, Charlton were in the Premier League.

The celebrations straight afterwards will live with me forever. I was cuddled by just about everyone and I was on the edge of tears when directors Roger Alwen and Richard Collins both embraced me. I was so pleased for Roger, he had been the man who gave me my first start in professional football and who had done so much for the Club. It was special moment for me.

The cuddling didn’t stop there though as Alan Curbishley embraced me at the top of Wembley’s 39 steps where I was positioned for the presentation, when he followed his team up to get the Nationwide trophy!

Afterwards it was just a big party. Wembley played celebratory music and the fans were ecstatic. In the Wembley Banqueting Hall afterwards it was time for back slaps and general congratulations. I gave passes to my nephew Simon and his dad Richard Willgoss and it was such a thrill for me to see Simon so happy. Charlton were off then to a hotel reception and all of the Club’s directors invited me to come but I felt that I should leave them to enjoy their Club party. So after finishing my Football League duties and after saying my goodbyes to my colleagues and the guys at sponsors Nationwide, I collected my car from the Wembley Hilton car park and set off for home.

This had easily been one of the greatest days of my life.